fab&t customers save $500,000+ with plinqit
FAB&T has helped customers save more than $500,000 since launching Plinqit, a brandable, savings app and the only savings tool that pays users for engaging with content. 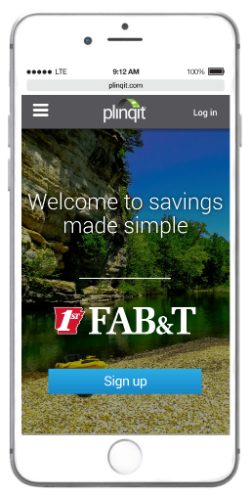 As an early adopter of Plinqit, FAB&T has experienced an increase in customer engagement and deposits. The average Plinqit user saves over $1,400 and 80% of users mainta in or create another goal after achieving their first Plinqit savings goal.
FAB&T customers are enjoying a better digital experience and learning positive money habits with a wide variety of savings goals from emergency funds to summer vacations to college tuition.
Plinqit is unlike any other saving app on the market because it’s free and easy to use, while simultaneously driving engagement and deposits.
The mobile-first platform’s patent-pending Build Skills™ pays users for engaging with content and learning about finances. By watching educational videos or reading articles in the Plinqit library and taking a short quiz, customers are rewarded by adding money toward their savings goal. This creates higher engagement for financial institutions, like FAB&T, while rewarding users for improving their financial literacy.
“Plinqit has proven to be our customers’ savings tool of choice and the results have been pretty remarkable,” said Roger Sundermeier, SVP & Chief Brand Officer with FAB&T,
“The app really helps people save by giving them a goal to work towards rather than just storing away funds. It feels tangible and real for users because they know what they are saving for and learn more about finances in the process. Plinqit’s mobile platform makes it even more attractive in our current environment.”
Sundermeier continued, “While we have locations across the state, our headquarters is in a military town with a lot of military personnel who come in and out of the city. With Plinqit, we have the flexibility for them to maintain their initial financial relationships while saving digitally. Plus, we are able to strengthen our relationship with the base by supporting their initiatives such as Military Saves week, Teach Children to Save project and overall promoting financial literacy.”
“We created Plinqit as a tool to not only help customers safely and securely meet their savings goals, but to also help financial institutions compete for deposits and develop deeper relationships with customers,” said Kathleen Craig, founder and Chief Executive Officer of HT Mobile Apps, creator of Plinqit. “We are thrilled to see FAB&T and their customers meet this milestone. Saving over $500,000 truly demonstrates how effect Plinqit is at helping users practice better savings habits and grow their knowledge of personal finances.”

Plinqit is a brandable, mobile first platform that is elegant and highly powerful at the same time. Unlike any other savings app on the market, its patent-pending Build Skills™ pays users for engaging with content, creating higher user engagement for financial institutions. Created by Millennials for Millennials, Plinqit helps financial institutions connect with this important demographic in a meaningful, relevant way – bringing together digital customers, FI’s and savings in one beautiful place.
For more information, visit www.plinqit.com.

FAB&T is a family-owned and managed commercial bank chartered in Jacksonville, Arkansas with Total Assets of $760 million and 22 locations in Central and North Central Arkansas. FAB&T also offers a full-service mortgage department, trust and wealth management services, 24/7 Customer Call Center, and a credit card division, located in Atlanta, Georgia. For more information, visit www.fabandt.bank.
FAB&T Adds 3 to board of directors

March 2020 — The stockholders of FAB&T recently elected three new members to its Board of Directors. Ali King Sugg, Dr. Chev Ergle, and Mark Wilson assumed their new roles at last month's board meeting.

FAB&T Chairman, President, and CEO Larry Wilson stated, “We are extremely pleased to be able to add three quality individuals to an already wonderful and experienced Board of Directors. Each of these individuals will bring different ideas and opportunities to the table. They are all well-respected members of their communities and circles of influence, and we are excited for our future with their leadership.”

Ali King Sugg is a native of Clinton and is a graduate of Arkansas State University with a Bachelor of Science degree in Radio-TV and a minor in Marketing. In 2016 she built the only full-power FM radio station licensed to Heber Springs and Cleburne County, and is now the Owner/General Manager of Red River Radio, Inc. and a morning show personality on KSUG. She is also a dance instructor at her mother’s dance studio, Judi King School of Dance.

She is a passionate advocate for The CALL in Cleburne County, a Councilwoman for the City of Heber Springs, Past-President of the Arkansas Broadcasters Association, board member on Arkansas State University-Heber Springs Development Council, and the Heber Springs Future Fund. In 2017, Ali was chosen as one of Arkansas Business Top 40 under 40 honorees, and in 2018 and 2019 Arkansas Business listed Red River Radio, Inc. as a Top Woman-Owned Company in Arkansas. Ali was also a 2019 recipient of the Emerging Young Alumni award from Arkansas State University Alumni Association. Her radio station has received multiple community service awards, given by the Arkansas Broadcasters Association. Ali and her husband Joe live in Heber Springs, they have two children, Spencer and Sydney.

In practice at Eye Physicians and Surgeons in Jacksonville for more than 15 years, Dr. Chevron Ergle has worked tirelessly on behalf of Optometry in Arkansas. He is instrumental in growing new leaders in Optometry as the co-developer and facilitator of the Arkansas Optometric Association’s (AROA) Leadership Program (LEAD). He has served as Chair of the AROA’s Membership and Nominating committees. He received the AROA’s Optometrist of the Year award in 2017 and the Young Optometrist of the Year award in 2008. Dr. Ergle joined the Arkansas Optometric Association’s Board of Directors in 2009 and served as President in 2015-2016.

He currently serves as President of Vision Arkansas, the charitable foundation of the AROA. He was awarded the Young Optometrist of the South, by the Southern Council of Optometrists (SECO), in 2009. He joined the Board of Trustees in 2016 for the SECO as the Trustee from Arkansas serving alongside Trustees from 12 additional southern states. Dr. Ergle currently serves as Optometry’s representative to the Prescription Drug Monitoring Program’s Advisory Committee. He is a graduate of Arkansas State University and the Southern College of Optometry. Chevron is married to Angela and they have two children, Noah and Hannah.

Mark has been with the bank since 2001. He started as a loan officer, and has held several positions at the bank, including supervising online banking, debit cards, ACH and wires, retail services, the customer service call center, loans, and credit cards.

A native of Jacksonville, Mark holds a Bachelor of Arts degree in Economics and Business with an emphasis in Accounting from Hendrix College, and a Master of Business Administration degree from the Sam M. Walton College of Business at the University of Arkansas. He completed the Graduate School of Banking at Louisiana State University in 2008, and the American Bankers Association’s Graduate Commercial Lending School at Southern Methodist University in 2015.

Mark and his wife Rebel have been married for sixteen years and they have two boys, aged 10 and 12.
---
FAB&T is a family-owned and managed commercial bank chartered in Jacksonville, Arkansas with Total Assets of $785 million and 22 locations in Central and North Central Arkansas. FAB&T also offers a full-service mortgage department, trust and wealth management services, 24/7 Customer Call Center, and has a credit card division, located in Kennesaw, Georgia. FAB&T has been recognized as a “Best Places to Work in Arkansas” by Arkansas Business, a Military Bank of the Year by the Department of Defense, and a “Best In-State Bank” by Forbes.
FAB&T named "best in-state bank" by forbes
FAB&T has been named a “Forbes Best In-State Bank 2018.”

“We are pleased to be placed on this prestigious list,” said Larry Wilson, FAB&T Chairman, CEO and President. “We constantly deliver on our commitment of providing quality products, services, and experiences for our customers, employees, and communities. It’s a tremendous honor to be recognized not just locally, but also nationally for our efforts by a global brand such as Forbes.”

FAB&T shares this honor with 123 other banks across the country, which ranks them in the top 2.3 percent of banks in the United States. Nationwide financial institutions like Bank of America, Wells Fargo and Chase Bank, which have branches in at least 15 U.S. states, were excluded from the final rankings.

Statista, a company that specializes in nationwide polling, conducted the research forForbes and over 25,000 customers were polled for this particular research project. Customers were asked their opinions on their current and former banking relationships, as well as five other categories, including trust, terms and conditions, branch services, digital services and financial advice.